Dr. Cooley and his sister

Dr. Scott Cooley was born in Victoria, BC, Canada.  He grew up loving sports and being active.  At the age of 5 he began playing soccer (football) and is still playing to this day, most recently playing for Carlton Club in Barbados.

As a child, Dr. Cooley regularly accompanied his Mom to the chiropractor, whom she visited regularly as it helped tremendously with her headaches/migraines.  His Mom (being the amazing Mom that she is) knew the importance of a properly functioning nervous system, and would have the chiropractor regularly check her kids to make sure that they were functioning at their best.  This was where the “seed” of chiropractic was first planted.

Before studying chiropractic, Dr. Cooley began studying engineering at the University of Regina.  During the first year of engineering, Dr. Cooley had a snowboarding accident which resulted in whiplash. He chose to forego the prescription medications his medical doctor prescribed and began seeing a chiropractor.  The philosophy of chiropractic (the body healing itself) really resonated with Dr. Cooley and he transferred out of the engineering program and began the process of obtaining the courses required for chiropractic school. 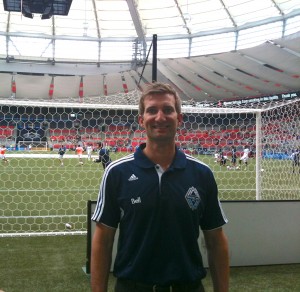 Team chiropractor for the Whitecaps FC

Dr. Cooley was able to combine his passions of football and chiropractic by working the past five seasons as the team chiropractor for Major League Soccer’s (MLS) Vancouver Whitecaps FC. Over the years, he has cared for  many professional athletes (MLS, NFL, Olympians, National and Provincial team athletes) as well as many celebrities.

In early 2012, Dr. Cooley traveled to Ghana and St. Vincent and the Grenadines on chiropractic mission work.  He knew it was going to be a great experience but this was life changing!  Experiencing other cultures and the sense of gratitude that people lived with resonated with Dr. Cooley.  On his very first trip to Barbados he knew that Barbados was where he belonged.  Dr. Cooley lives a chiropractic lifestyle, which is one that focuses on a properly functioning nervous system, eating well, thinking well and moving well.  What better place to do that than in Barbados!

And the story continues…

“I’ve had the pleasure to work with many chiropractors over my ten year soccer career, and Dr. Scott Cooley is among the best. His ability to find my problem areas and fix them in a calm, relaxed, and direct manner kept me fit and on the field, which is crucial for any athlete. Not only is Dr. Cooley a good chiropractor, he is also a great guy to be around and a pleasure to work with.  I would definitely choose Dr. Cooley for any of my chiropractic needs!”